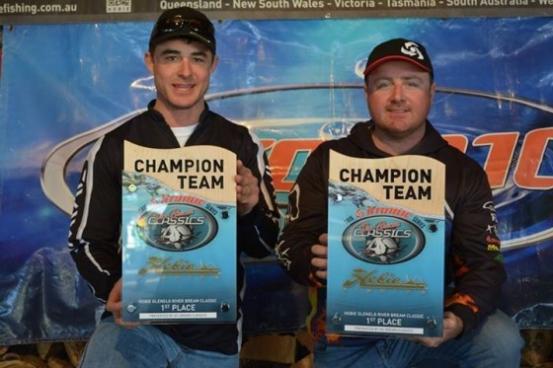 Leaving Colac late on the Thursday afternoon with a 3 hour drive in front of us Steve Parker and I had plenty of time to discuss what we thought the Glenelg River bream population would be up to. The curve ball being that we had heard the mouth had opened 2 days prior to the competition and with greatly reduced water levels and a now tidal system anything could happen. Upon arrival at our accommodation I proceeded to rig up my MajorCraft and Samurai rods with a variety of lures from the Frogleys stable. A couple of quiet drinks with the rest of the boys and it was off to bed for an early start prefishing the next day.

Prefish: Starting down the front in the estuary it quickly became apparent that there were plenty of fish holding in the deeper water however we chose to start fishing the shallows  to see if there were any fish feeding on the edges. It didn’t take long to put a couple of fish in the boat so we moved to a different section of the estuary and caught a fish or 2 there as well. To be honest it was without doubt the best prefish either of us have ever had on the Glenelg river. Being well known for having lots of bream, generally the size is lacking in comparison to some of the other systems we fish. Come the end of our prefish day the smallest bream in our bag would have been 35cm fork length with the biggest fish pushing 38cm. Scratching our heads we wondered whether or not this sort of fishing would hold up throughout the tournament days. Considering we had fished from the estuary up to the S.A border and caught fish in all different places we were hoping we had a plan to make things happen over the next 2 days. Just after lunch time on the prefish day we decided we would head back down the front put some bigger lures on and try catch a few mulloway that the Glenelg is synonymous for. In an hour and a half we caught 7 of them up to 65cms, great fun using the light Majorcraft Crostage and 4lb fluoro leaders, those Glenelg Mulloway just love the Bassday Range Vibes.

Day 1. Heading straight to one of the shallow banks that produced fish the day before we started fishing, not a bite in the first hour, what had changed? Moving to the next bank we drew a blank again and with no fish in the well at 9:30 we moved a little wider to see if the fish had dropped back into deeper water. Soon after we had our first, then second and third legal fish. With renewed enthusiasm we kept working this area keeping our lures on the bottom and retrieving them very slowly on the run out tide. The fish weren’t actively feeding so the slow presentation was the only way we could get the bites. From midday onwards the tide started  pushing in and the fish started to feed harder we must have caught 20 legal fish by days end and steadily upgraded the bag as the day went on. With boats and kayaks everywhere down the front it was surprising how well the area fished. Back at the weigh in our 5 fish went 3.56kgs and had us in the lead with good mates Paul and Alex only a couple of hundred grams behind in second place. Back to the house to re tie leaders and get organised for the next day.

Day 2. Taking off first we went straight back to the area in which we caught them the day before, once all of the other boats had gone past and the water settled a bit we had a small bite window where we were able to land 4 fish in pretty quick succession. We pulled hooks on our 5th fish 3 times. With even more boat and kayak pressure than the day before the fish really shut down on us. Still visible on the sounder they just would not bite. For 5 hours we fished on in the same area confident that they would fire up again. At 2:00pm with half an hour to go we moved back to a weed edge that had produced so well over the last 2 days and first cast the 2″ grub got eaten and the gamakatsu hook an the Atomic seekerz jighead found its mark, backing the drag off once clear of the weed and rocks it was a nervous minute or so before the fish was in the net. It was a massive relief to finally land that 5th fish with only moments to go, persistence had paid off and it was now time to head back to the weigh in. The scales settled on 3.58kgs slightly heavier than the day before handing us the win.

This was one of the first tournaments I have been able to use the new Samurai Reaction rods, I used the 101 and 181 models and continue to be blown away by the increased sensitivity the skeleton grips afford whilst working lures in the flowing water. Make sure you head into your nearest tackle store and check them out.

The Glenelg River would have to be one of the most picturesque places to visit and I cant wait for my next opportunity to get back there with the crazy bycatch of mulloway and estuary perch there is always something happening. With only 1 round to go in the Vic Bream Series at Mallacoota we sit in 2nd place for Team of the year honours, its going to be a big last round, cant wait.