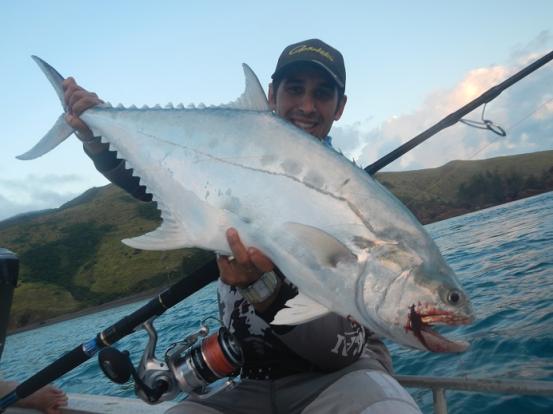 It’s pretty rare these days to get a full weekend of awesome weather, good enough to venture offshore.

The plan was to take the heavy popping gear and try our luck for a GT or two around some of the offshore pressure points. I had the pleasure of breaking in a new combo which consisted of a 60-100lb Samurai X-tracta (XT Pop 100), Shimano Saragosa 20,000SW loaded up with 86lb Unitika braid. I was using a large 190mm stickbait which I retrofitted with large Gamakatsu Tuned Assist singles and size 7 Gamakatsu split rings. These hooks and rings are seriously tuff!

We reached our first spot of the day at first light and began casting at the whitewater being churned up by the tide. Surely there had to be fish here…it looked too damn good for there not to be.

It didn’t take long before a mass of metre plus Queenfish were smashing our offerings and it was simply awesome to watch. It surely was different to the sootys and saratoga I’m used to when fishing the surface!!!

The queenies were great fun and certainly had us whooping with joy after we boat roughly a dozen in an hour.

Rhys’s next hook up was far more aggressive and seemed much larger. Could this have been the GT we went searching for? Rhys did well to keep him away from the rocks and then this fish went deep. At this depth, the tail beats were thumping away and we knew this was a Geet.

Rhys had been out many times chasing Geet’s before, had been blown away many times and hadn’t actually landed one of these solid fish so when I reached over the size and grabbed this fish by the tail wrist, he was pretty chuffed about it and rightly so.

Not a massive fish but certainly a good start at around 12kg. Seeing this thing fight, it really makes me wonder how those guys land those 50kg+ models.

I’ve got to say that the new X-tracta 60-100lb popping rod performed flawlessy  and handled these fish with great ease. It was still relatively soft in the tip for a heavy rod which I found to be a great plus when working large stickbaits effectively. The rod is matched with quality Fuji guides and the braid casted like a bullet through the K Series componentry. Just as an added bonus, the rod looks super sexy as well!

I’ve got a bug for this kind of fishing now and hope to do a hell of a lot more of it!!

We caught a dozen of these solid queenies within an hour. They were all over a metre long and went super hard